I would be remiss in my editorial duties if I failed to incorporate internet trends into our weekly topics.

You’ve probably already seen the middle image above floating around your Facebook feed, no doubt accompanied by intense debate.

The image in question is actually overexposed (significantly) and your brain unconsciously picks up on that in evaluating the image. A smartphone app that automatically corrects pictures adjusts it to the correct lighting, yielding the actual dress in a vastly different image. 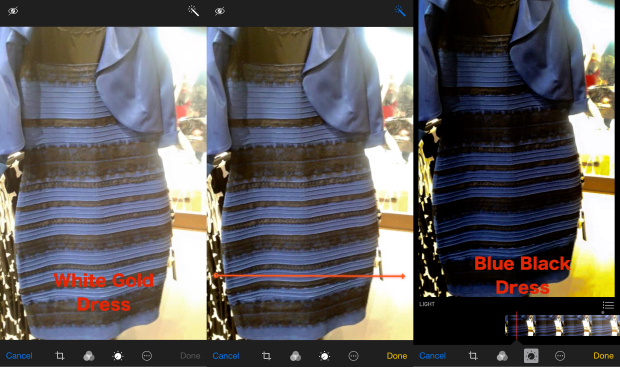 What was most interesting to me, however, wasn’t the dress itself, but the intense, INTENSE debate surrounding it.

The debate was split primarily into three camps:

Here’s the kicker, articles like this, this, and this popped up fairly early during this debate. The explanations were available, but the debate raged (and continues to rage) on.

And that’s when I started thinking, this debate looks strangely familiar. In fact, it looks remarkably like a debate on theology.

Here’s what I mean:

1. We refuse to believe opposing views can be equally valid.

The crux of this argument is perception.

“I see white and gold, and thus, it IS white and gold. If you see blue, black, red, green, orange, brown, or anything other than what I see… you’re wrong.”

How often do we hear this exact line in a debate about theology?

“God is a Judge. He is righteous and hates sin. He will judge the wicked and the unholy. Anything that doesn’t look like a judge is wrong.”

“No! God is a Father. He is kind and loving and forgiving. He gives grace and mercy without end. He wants to bring all to repentance. Anything you say about God that isn’t father-like is wrong!”

While this is a fairly simplistic example, I’m trying to illustrate a crucial point. When dealing with an infinite God, it’s very possible that some of us will experience Him in ways that seem to contradict the experience of others.

When Jesus prophesied Peter’s death, Peter asked him, “What about John?” and Jesus said, “If I want him to remain alive until I return, what is that to you? You follow me!” (John 21).

So often, we hear God say “go” and immediately begin criticizing anyone who isn’t “going”. We feel a burden for sex trafficking or poverty and accompany our efforts with a hefty dose of criticism for anyone not feeling the same burden.

Too often, we are convinced that there is only ONE correct perception available, and of course, we have it.

But just like this dress illustrates, two points of view – even two CONTRADICTORY points of view – can be equally valid. There is a scientific explanation for why one person sees white and another blue.

And there are legitimate reasons for why people disagree theologically or conceptually within the church.

The question is, can we appreciate and respect each others’ views, or are we going to spend the rest of our lives arguing over fabric hues?

2. We’re obsessed with being right.

One of the funny things to me concerning this dress debate is how passionate people are about validating their own opinions.

You see it everywhere you look and I often feel it myself.

We really want to be right.

Unfortunately, this compulsion often goes past the point of wanting to be accurate. In fact, it often ignores accuracy and truth altogether.

When we’re obsessed with being right, we are already wrong.

When we’re obsessed with being right, we ignore anything that contradicts our viewpoint. We gravitate towards yes-men who will affirm our worldview instead of challenging it, and as a result, we stop learning, and we stop growing.

When the topic is a lady’s dress, this behavior is petty but not necessarily detrimental.

When the topic is God, relationships, and life, however, it can extremely dangerous.

I’ve noticed that the difference between people who love God for the long haul and people who burn hot but fade is teachability. Those with a soft heart, who are able to receive correction when necessary, are the ones who enjoy their lives and sustain their walk with God over the long haul.

Those with hard hearts, who are always “right”, might be passionate for a season, but 10, 15, 20 years down the road, the always mange to blow up their lives.

Fight to keep your heart soft. When you feel like you have all the answers, that’s a signal it’s time to begin spending more time in environments that challenge you.

Let me be the first to say that the more I learn about God, the less I feel I actually know.

For those who looked at the dress and were humble enough to accept that other people were seeing something entirely different – this realization was a bit freaky.

After all, if you can’t trust your own eyes, what can you trust?

For those of us aggressively seeking truth in our theology, we can often feel a bit confused – if not entirely perplexed.

After all, once you reject the fabricated rhetoric and convenient traditions, you start to really see the holes. Maybe you’re looking at God and the Word and life and beginning to freak the **** out.

While I don’t have anything profound to offer you, I can tell you this:

God isn’t scared or confused, so you don’t need to be either.

If there’s one thing I know, it’s that Jesus came for us to have abundant life, and regardless of the answers to our infinite questions, that will always hold true.

He knows what He’s doing, and He wants to tell us about it and partner with us to bring Heaven to Earth. When you start to feel hopeless, that’s not the Spirit of God, and you don’t have to tolerate it.

Personally, I’m at the point where the questions have become an adventure. It’s fun when the possibilities are endless.

And we serve a God with endless possibilities. So enjoy the ride, even when it’s a bit confusing.

Well, as Forrest Gump once said, “That’s all I have to say about that…” 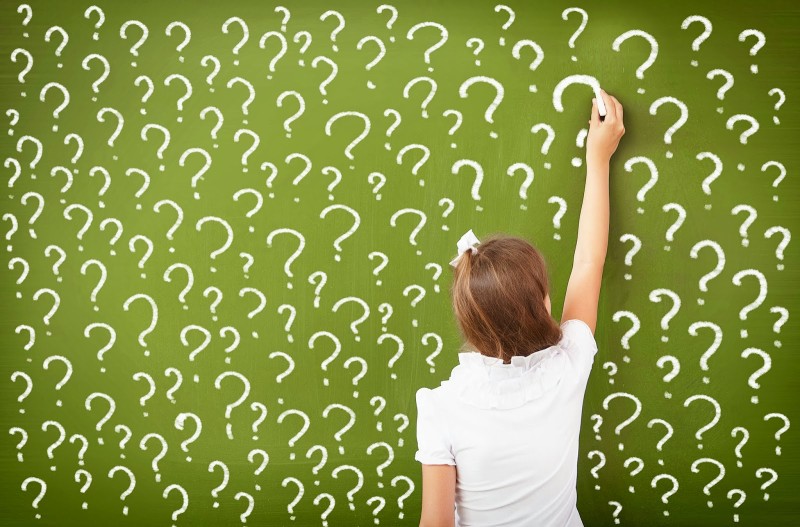 6 Questions That Will Help You Navigate Change

Jacob McMillen - February 7, 2014
4
We started Funny Fridays last week and it was a pretty big success, so here's round 2 coming at ya! We've scoured the web's...